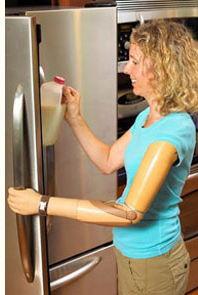 Many myoelectric control systems allow the use of proportional control so the speed or activation varies with the intensity of the muscle contraction. Myoelectric prostheses include:

The main advantage of most cosmetic restoration prostheses is their cosmetic appearance. With advances in materials and design, some passive hands are virtually lifelike.

However, most of these cosmetic prostheses are usually less functional and more expensive than active terminal devices.

Shoulder Disarticulation / Forequarter Amputation is the removal of the entire arm including the shoulder blade and collar bone. A high level of function can be difficult to restore. Many patients learn how to accomplish activities of daily living using the intact limb and for their amputated side, prefer a passive/cosmetic prosthesis to give their body symmetry and improve balance.

However, there are advances in upper limb myoelectrics, which can be an alternative to some. Myoelectric arms work using electronic sensors to detect muscle, nerve and EMG activity generated by the patient. These signals are relayed to various electric motors, which enable the patient to grip and move the prosthesis in an effective manner.