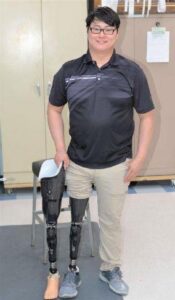 AMHERST — Not only does Jude Doss craft and assemble prosthetic limbs, he wears one, too. Doss, a 2014 Monroeville High School graduate, is a chief technician at Leimkuehler Orthotic and Prosthetic Center in Amherst.

He has worked there since 2017, but his relationship with the business stretches throughout most of his life.

Doss was born in Daejeon (also spelled Taejon), South Korea, and placed for adoption. He was born without a tibia or patella in his right leg. Due to this, his right leg was amputated above the knee.

When he was 3 years old, he became a patient at Leimkuehler.

As a child grows, there is a need for a new leg.

Over the last 20 years, Doss said he has had more than a dozen different prosthetic legs. Some patients may need a new socket due to shrinkage of their residual limbs, such as by losing a significant amount of weight. 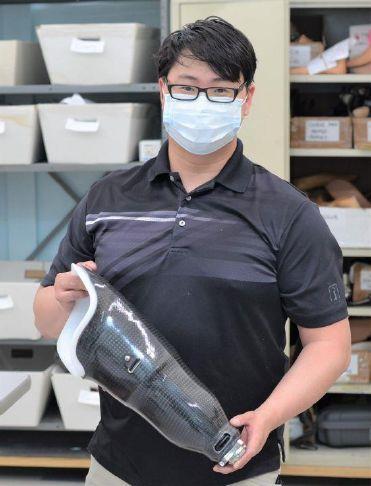 “Since I have a leg, it helps me to know I am helping other people with amputations,” Doss said.

In 2017, he received a call from John Fabian at Leimkuehler offering him a job.

Since then, Doss has used his technical skills and personal experience to craft limbs for hundreds of amputees.

Creating prosthetics requires large machines with lots of power as well as hand tools that can make millimeter-precise adjustments.

Doss’s workbench features many different tools to help him craft prosthetics such as screwdrivers, scissors and Allen wrenches, also known as hex keys. 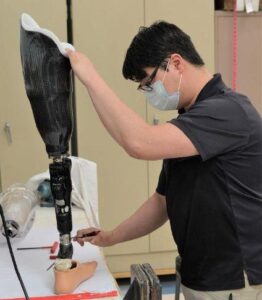 The process of creating a new leg can take three to four weeks. It starts by applying a plaster of Paris cast to the patient’s residual limb. That cast is removed from the patient and filled with plaster to create an exact copy of the residual limb, called a positive mold.

This mold is then used to make a socket. Sockets are made either by heating plastic and applying it to the mold or by applying carbon fiber fabric then applying resin.

A prosthetist, like Doss, will then check the fit and comfort of the test socket with the patient before a permanent socket is made. 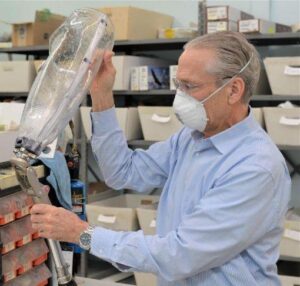 For above-knee amputations, once a socket is complete, it can be attached to a knee. There are conventional knees, which are essentially just a hinge, and computerized knees.

A computerized knee has a CPU that measures the location of the knee hundreds of times per second. This helps the knee determine if it needs to remain rigid as the wearer’s foot is about to contact the ground or to flex as the leg is swung forward to take the next step.

A prosthetic leg with a conventional knee can cost a few thousand dollars according to Leimkuehler. Legs with computerized knees cost significantly more.

Leimkuehler Orthotic-Prosthetic Center is a multi-generational company caring for amputees since 1948. Founded by an amputee, the practitioners have helped many patients regain their mobility.

Over the years, the Leimkuehler practitioners have collected old samples of different prosthetic feet. These feet were donated to ROMP (Range of Motion Project), a nonprofit organization that provides prosthetics for those who can’t afford them. ROMP refurbishes donated components, purchases new components, and even invents components — whatever it takes to get its patients what they need. The feet were shipped in early December.

Father and son, Bill and Paul Leimkuehler, have volunteered at the ROMP clinic in Guatemala providing free care for those in need. 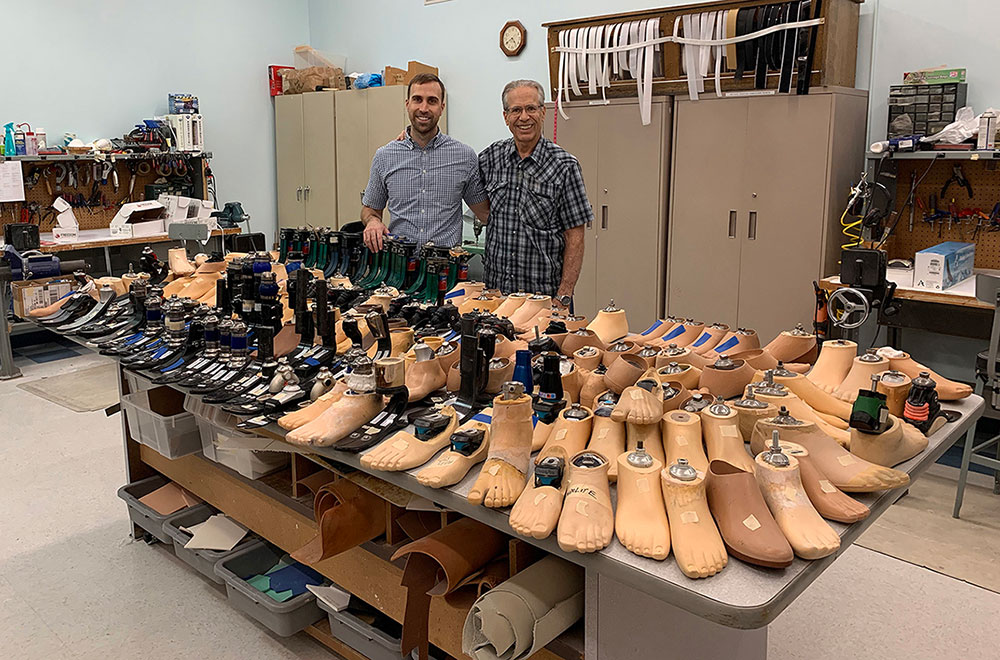 Leimkuehler proudly supports the communities it calls home. During the COVID-19 pandemic, company staff fabricated personal protective equipment (PPE) shields for the pharmacy team at the Old Brooklyn Walgreen’s. Bill Leimkuehler, CPO; his son Paul Leimkuehler, CPO; and longtime employee John Fabian, CPO, created and helped to install the PPE shields. This allows those that work at and visit Walgreen’s to safely conduct their business. 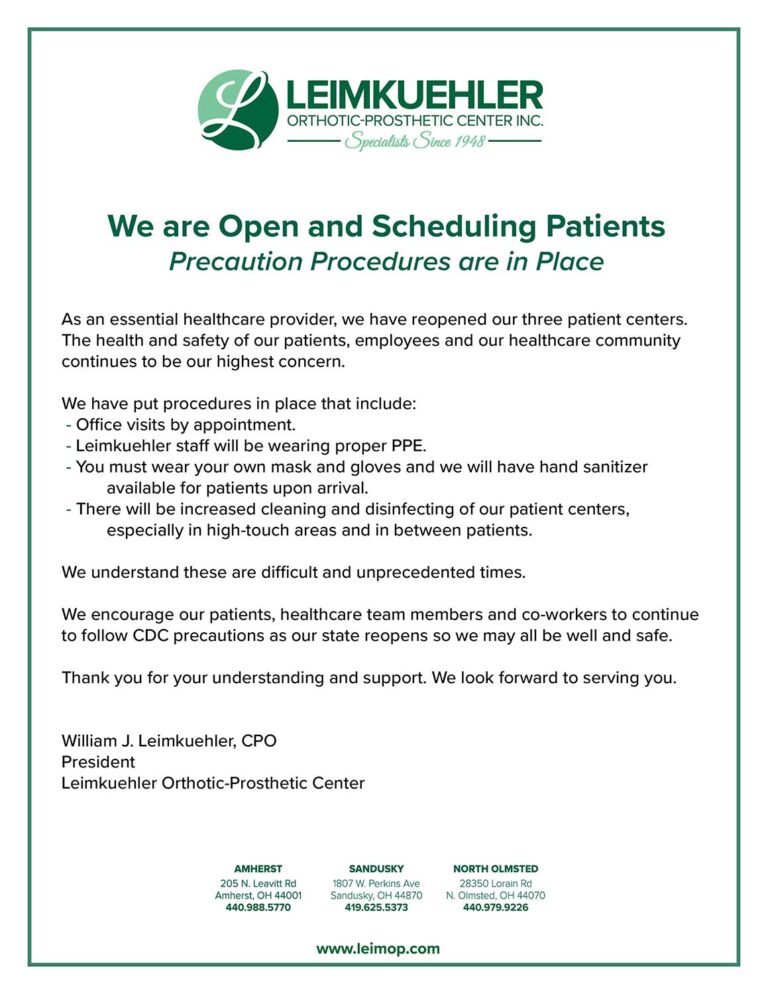 This true-life documentary follows the journey of Paul Leimkuehler who lost his leg during the Battle of the Bulge in WWII. He turned his disadvantage into an advantage by building his own artificial leg and opening a prosthetic business. He returns to the world of sports triumphantly after designing the first pair of ski outriggers in the U.S. launching the adaptive skiing movement that earned him a spot in the U.S. Ski and Snowboard Hall of Fame, the U.S. Disabled Snow Sports Hall of Fame and the Ohio Veterans Hall of Fame. The film follows the influence of his legacy on the Paralympic skiers and snowboarders today including gold medalist, Mike Schultz, narrator Andrew Kurka and the evolution of technology in adaptive sports.

Tickets are $20 each, to reserve tickets, go to http://bit.ly/FreshTracksOH 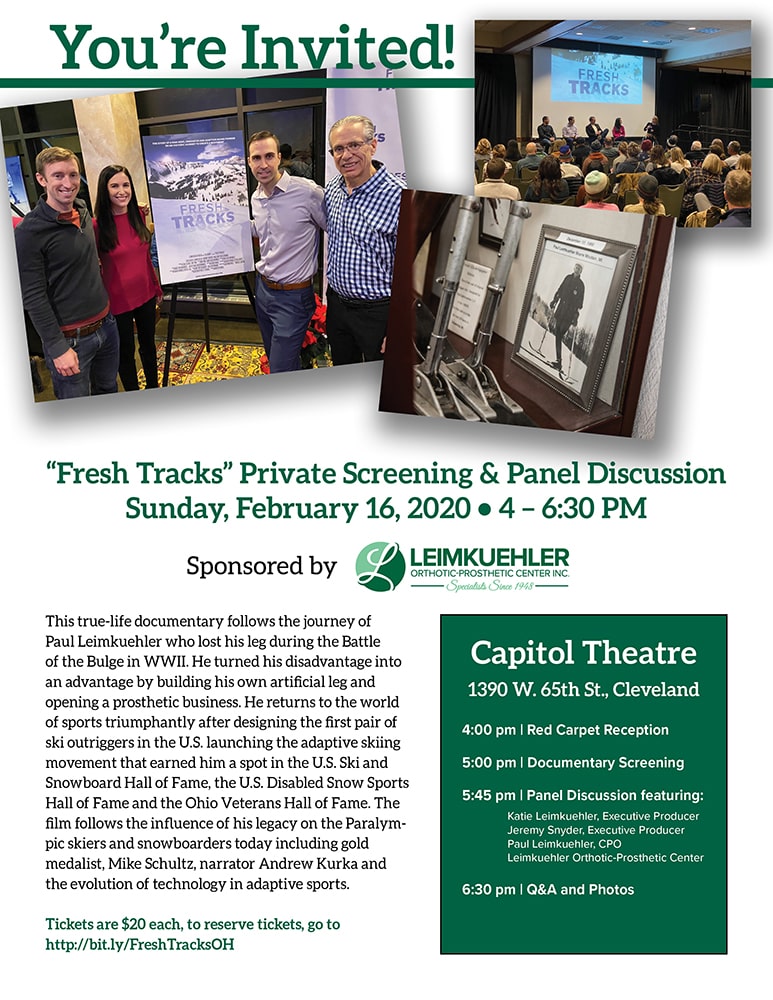 Prosthesis Fit Clinic presented by Leimkuehler Orthotics-Prosthetics Center in Cooperation with Freedom Innovation for lower extremity prosthetic users. Prosthetic experts will be on hand to evaluate your current prosthesis, answer questions, and make recommendations for your care.

We will also have the full line of Freedom Innovations prosthetic feet for participants to trial in the office as well as the Plié 3 Microprocessor Knee by Freedom.

The clinical team of Leimkuehler Orthotic-Prosthetic Center was pleased to participate in the “Limb Salvage and Wound Care Symposium: A Team Approach,” presented by Cleveland Clinic.

It also included exhibits, that Leimkuehler participated in showing a variety of orthotic devices used in wound care and prosthetic devices often used when a patient succumbs to a partial amputation.

The two-day event, Oct 11-12, took place at the Doubletree by Hilton Cleveland. 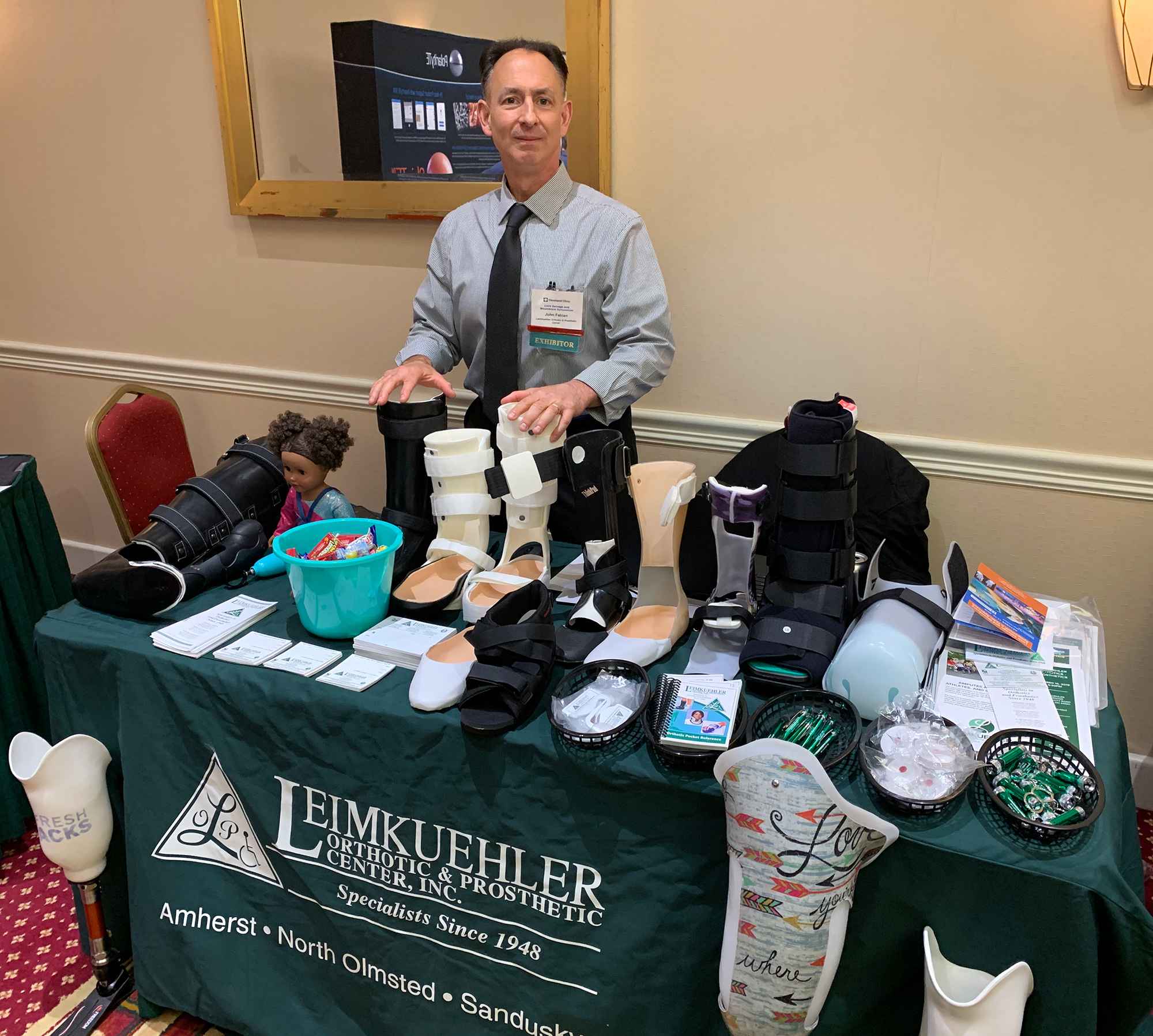